An article that I wrote that may interest you.

Please do make sure you read the last italicized paragraph. All conclusions should be tempered accordingly.

Not really too earth shattering but I hope it fosters food for thought!

Unfortunately, when a term like apps is used in the mainstream, the integrity of its meaning is diluted. In our case – is a Chrome Web Store (CWS) App the same as a Mac App Store (MAC) App? Further, is a desktop op sys app the same as a smartphone app?

Studying and comparing the Top Paid Apps for February at the CWS, MAC, and GAM yields interesting information. Here we follow the money.

Note – Ditmo is the source for MAC and GAM top ranking identification.

At each store different trends appear to be forming. 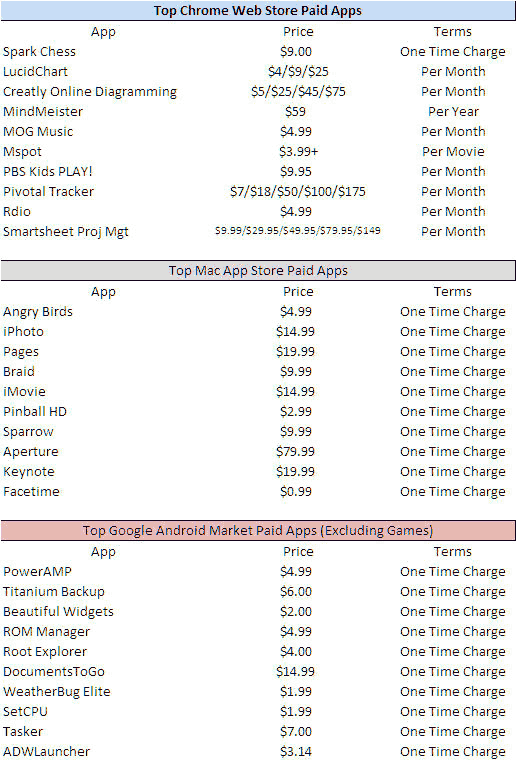 The pricing strategy at the Chrome Web Store differs from the strategy at the other two stores. Per month charge terms dominate the CWS list. The per month price point seems to range from $4 to $10.

Chrome App Developers may want to note that not one of the Top 10 Apps chooses to utilize the CWS pricing service. All apps offer ‘in app payments’ which essentially are outside the CWS program.

At the Mac App Store and the Google Android Market all of the Top 10 Apps are one time charges. The price point median at MAS is slightly higher at $12.49 when compared to GAM median of $4.50.

This is a view of three web stores offering apps. The Top Paid Apps from these stores represent products that store customers have valued today through their purchases. Without a doubt, the stores are selling to different markets. This is reflected in the information provided above. As an example -

Essentially, it doesn’t appear like the stores are competing for the same paying customers… yet.

NOTE – There has been considerable discussion amongst the staff here about the definition of ‘paid app’. The discussion revolves around the fact that all of the apps listed on this page have free trials (except for the Android Market Apps, and the three Mac Game Apps). The difference between CWS and MAS is CWS will list an app as a paid app, but allow access to the free trial. With the MAC store, an app must be paid for in order to install the app. Both Google and Apple have more money then ChromeOSApps.org. We do not reclassify their categorization. We do agree that this may skew the data.