The about:flags commands for Google Chrome

The about:flags in Google Chrome browser is a pool of experimental features that the Google Chrome team has been working on, and which you can have a sneak peek on. It was earlier named as the about:labs but later the changes made and the list of experimental tools can be used with a warning, that they can make changes to the browser adversely.

As of now, here are a few experimental features available when you visit the flags section by typing about:flags in the omnibox and hitting enter.

Remoting: This is a tool only for the developers. Trying this if you are not a developer, would give you nothing in the front. It enables the UI and backing code for the Remoting service process.

GPU Accelerated Compositing: This feature would help the browser use the Graphics Processor Unit hardware, to enable 3D CSS and higher performance of the web pages.

FPS Counter: This is a frame rate counter, that would run within the browser to check the frame per second speed when the hardware acceleration is active.

Print Preview: This is a handy feature of the feature when the in-tab preview of the print operation is shown enabled.

Web Page Prerendering: This is a feature in the browser that prerenders the complete web pages to increase the browsing experience and the speed of loading of the web pages.

Experimental Location Features: This feature enables the geolocation feature and includes usage of the operating system API in your local computer. This feature can be called as a helper for Google to accurately judge the positioning by sending some extra local network config data to the Google location service.

Enable better omnibox history matching: Enables substring and the multi-fragment which match from the URLs that were opened or searched in the history of browsing in the Chrome browser. 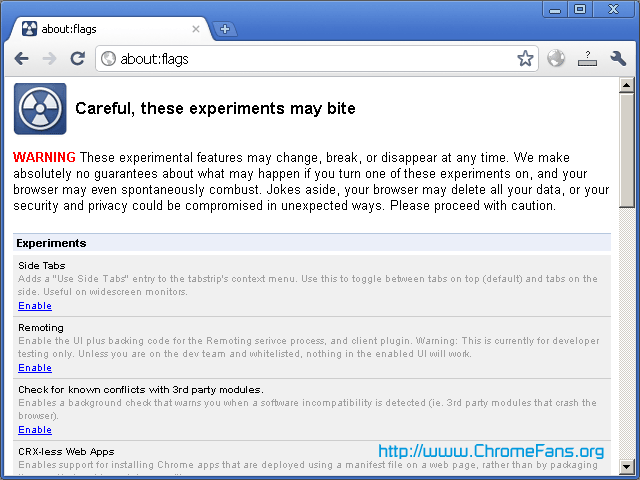 These were some of the useful in the labs section of Chrome, and these can be enabled and worked on, only if you are version the developer version of Chrome, or the perfect usage of these features can be seen when it’s fully functional and launched in one of the stable versions of the Chrome browser. Playing around with these features without any knowledge can affect the performance of the browser.

Other resources about Chrome About commands