Just after the first year of Google Chrome, Google has released Chrome 3.0 on 9/15/2009 (Version number: 3.0.195.21). According to Google, Chrome's JavaScript performance has improved 150% since the release of the first beta and by more than 25% since the last stable release. The new stable version will also feature Chrome's new Safari-like New Tab page, an improved Omnibox and better HTML5 capabilities, as well as support for Chrome themes.

There is still no official release for Mac or Linux. Both of those builds are coming along nicely, but it appears we’ll now have to wait for Chrome 4 before we see these versions.

Here is what the Official Google Blog says:

Google Chrome after a year: Sporting a new stable release

At Google Chrome's first birthday just two weeks ago, we looked forward to an action-packed year for the browser and the web. Thanks to a full year of great feedback from our users, we're kicking off our second year of Google Chrome with a brand new stable release. This release comes hot on the heels of 51 developer, 21 beta and 15 stable updates and 3,505 bugfixes in the past year

A wicked serve, volley, and return: Fast, fast and fast

This new release of Google Chrome is faster than ever, as we continue to provide a modern browser that starts up quickly from your desktop, and is fast to load web pages and web applications. 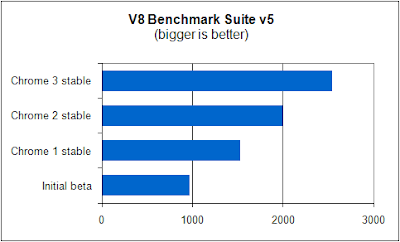 Notably, we've improved by more than 150% in Javascript performance since our very first beta, and by more than 25% since the most recent stable release.

With just a few deft strokes: The Omnibox

We've also improved one of the most used and loved features of Google Chrome, the Omnibox. Because it's a search bar as well as the web address bar, the multi-talented Omnibox helps you get to the sites you're looking for with just a few keystrokes. With this release, we've optimized the presentation of the drop-down menu and added little icons to help you distinguish between suggested sites, searches, bookmarks, and sites from your browsing history.

Other resource about Google Chrome