"Lars Bak, the Google engineer who was the technical leader for Chrome's V8 JavaScript engine, said at the launch event Tuesday he's confident Chrome is "many times faster" than the rivals at running JavaScript, the programming language that powers Google Docs, Gmail, and many other Web applications.
But when pressed for specifics, he told me to try them out. So I did.
Google offers a site with five JavaScript benchmarks. On each one of these tests, Chrome clearly trounced the competition. I hope benchmarking experts and developers will weigh in with comments about how well these tests represent true JavaScript performance on the Web--either for ordinary sites or for rich Web apps." 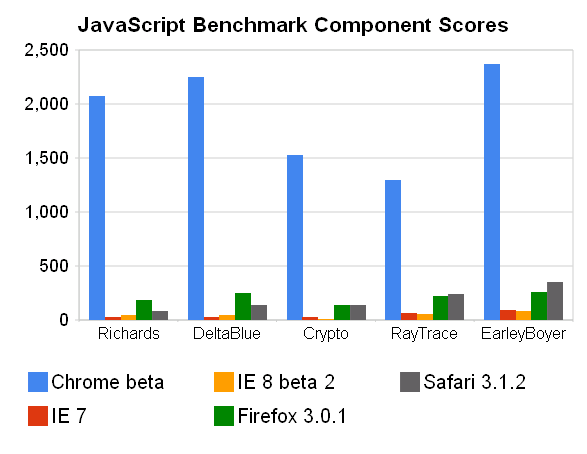 Google's Chrome overpowers the other browsers on the five subtests by which Google measures its browser's JavaScript performance.

Here's the site description of the speed tests: 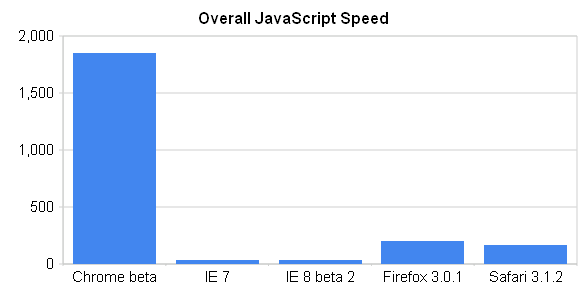 Google's overall score is head and shoulders above the competition for executing JavaScript.

The Resource of Goole VS Firefox, IE, Safari in speed test

#1  Richard posted on September 08, 2008 17:18 PDT
Chrome is the fastest browser I've ever used!
#2  Brian posted on October 26, 2008 15:34 PDT
Chrome is an amazingly fast browser, however, Mozilla has made some major improvements to Firefox. With the release of Firefox 3.1 beta 1, Chrome now has a direct competitor when it comes to speed. Mozilla has introduced their new java engine that can be enabled in "about:config" in their new Firefox beta. With this java engine enabled, Firefox becomes a little bit faster than Chrome. Mozilla plans to have this new java engine (dubbed "tracemonkey") enabled by default when they release the stable version of Firefox 3.1. Chrome is going to have to get even faster if it wants to continue being number 1.