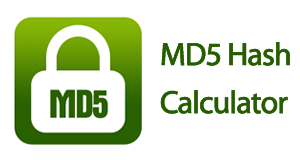 I just created a free web app - MD5 Hash Calculator, it's a very simple tool to generate the MD5 hash of a string in security. The encryption process uses Javascript, so your input doesn't even reach the web server. We do not store or monitor your input in any way.

This free MD5 hash generator is useful for encoding passwords, credit cards numbers and other sensitive data into databases(MySQL, MSSQL, Postgress or others). There are three versions for MD5 Hash Calculator currently:

MD5 Hash Calculator supports multi-language, it simply saves the language package as a TEXT file, this is a very tiny file(less than 50 lines), it can be easily localized. If you would like to help make it available to more users by translating it into your favorite language, click here.

What is MD5 Hash

From Wikipedia: The MD5 Message-Digest Algorithm is a widely used cryptographic hash function that produces a 128-bit (16-byte) hash value. Specified in RFC 1321, MD5 has been employed in a wide variety of security applications, and is also commonly used to check data integrity. MD5 was designed by Ron Rivest in 1991 to replace an earlier hash function, MD4. An MD5 hash is typically expressed as a 32-digit hexadecimal number.

Other resources about MD5