Samsung Chromebook is one of the innovative netbooks launched with the Google Chrome OS, apart from the other manufacturing brand Acer. It gives one of the best browsing and working experience for the users who work on the web most of the time. The fast booting up, longer battery life, and the small size would be the unique selling points of the Samsung Chromebook. These netbooks have a streamlined interface making everything easier for the users. The navigation of folders, browsing of web, opening and editing documents, using the apps and everything else is easier to do, and more secure, thanks to the malware and virus protection by the Chrome OS.

Design of the Samsung Chromebook

The Samsung Chromebook comes with a 12.1-inch LED Backlit display, and the screen is an anti-reflective one. It is rightly called the SuperBright display with the LED being 40% brighter than normal. The left side has a USB port and other side has a USB port, the charger slot and a 4-in-1 memory card reader and a 3.5-mm jack for headset. The curvy edges look pretty decent on the white color Samsung Chromebook and the design is good from the bottom too with no much sections. The keys on keyboard are dug-in to make the base look flat from the side, and this mimics the larger laptops from Samsung. The touchpad is buttonless and the bottom of it can be pressed to click and the touchpad supports multi-touch. 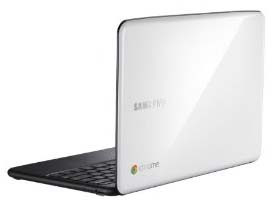 The Samsung Chromebook has the Google Chrome OS, with the blazing fast speed for booting up, loading web apps and browsing the web. Automated updates in the backend for all the apps and the operating system, and the data synced up with the web so that you don't lose anything if your Chromebook is lost or corrupted. The Chrome OS supports having multiple user accounts, and this is the first OS that would have an internal defense mechanism against the viruses and malware.

The interface is optimized such as to increase the battery life to a good extent, and it provides around 8.5 hours of battery life. And around 1000 charge cycles would still keep the battery to 80% of its original, i.e. around thrice of normal laptop batteries. The Samsung Chromebook is powered by the 1.66 GHz Atom based dual-core processor, and it has 16-GB storage with 2GB system memory. There is a 1-megapixel camera which helps in video chats.

There are 2 models that the Samsung Chromebook comes in. A Wi-Fi model and a 3G model is available in the market. The 3G Chromebook has a slot to place the 3G SIM and use the data network provided by the Verizon wireless network. The 3G version even includes the Wi-Fi connectivity option, compatible with Wireless-N 802.11n and 802.11b/g networks. The Chromebook has 2 USB slots with the USB 2.0 connectivity.

The Samsung Chromebook is quite efficient to load multiple web apps together and function at the same time, and the different connectivity options of it, helps to keep it connected to the web when you are at home, office or traveling.

How to purchase a Samsung Chromebook

You can purchase a Samsung Chromebook from Amazon Online Store.

Other resource about Chromebook