Google Chrome Dev version was updated to 3.0.193.0, there have been some breaking changes in the way Google Chrome installs an extension since version 3.0.189.0, this is a very important update, Chromium Team has been changed the way to package extension.

1. Close all your Chrome windows. 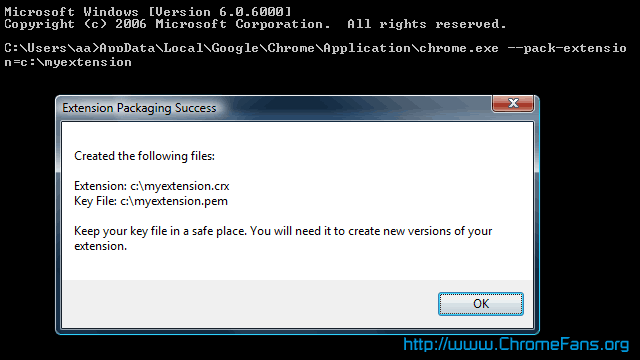 If you've developed an extension, you can learn how to repackage your extensions for Chrome v 3.0.189.0 in the packaging doc on Chromium developer site. Note that your extension ID will now be your public key, so you'll have to change any code that uses that.

If you're using an extension someone else has developed, you will have to reinstall it once the developer has repackaged it (as described above). We've already updated our sample extensions.

PageRank Status was updated to 2.0

Other resource about Google Chrome Extensions

#1  Arun posted on August 11, 2009 01:30 PDT
Anyone having trouble with this working?
I keep getting syntax is incorrect.. i have triple checked everything and cant see a problem
Andrew replied on August 11, 2009 06:04 PDT:
Hi Arum, did you try the extension sample from Chromium team?
http://dev.chromium.org/developers/design-documents/extensions/samples
#2  hamza posted on May 27, 2010 09:10 PDT
local is not recognized as internal or external command, operable program or batch file.